Back to all posts

Singer-Songwriter and visual artist Alison Mosshart with a few of her paintings backstage at The Riviera Theater in Chicago on May 23, 2016. Photos by John Philp Thompson

Alison Mosshart Of The Kills

Alison Mosshart is the badass beauty with edgy rocker style and angsty vocals, at once throaty and dulcet, best known as front woman of The Dead Weather (Jack White, Dean Fertita, Jack Lawrence) and The Kills (Jamie Hince). She’s also an accomplished visual artist, who’s first solo show in New York last June teased fans with another side of the creative mania that appears to be the central pulse of her being. Though Mosshart keeps residences in London and Nashville, she makes much of her art on the go. A series of paintings from The Kills’ three and half-week American Tour, a collection of small pieces that slip into a suitcase like exaggerated postcards from the road, will debut at our annual Shindig this August 26 to 28. We are thrilled to add another great artist to the mix of stellar expositions, alongside photographers Steven Perilloux and Danny Clinch, from previous Shindigs.

Before embarking on a European summer tour for The Kills’ record “Ash and Ice”, Alison talked with the Journal about her visual art, balancing music and painting, skateboarding, muscle cars and Fugazi. 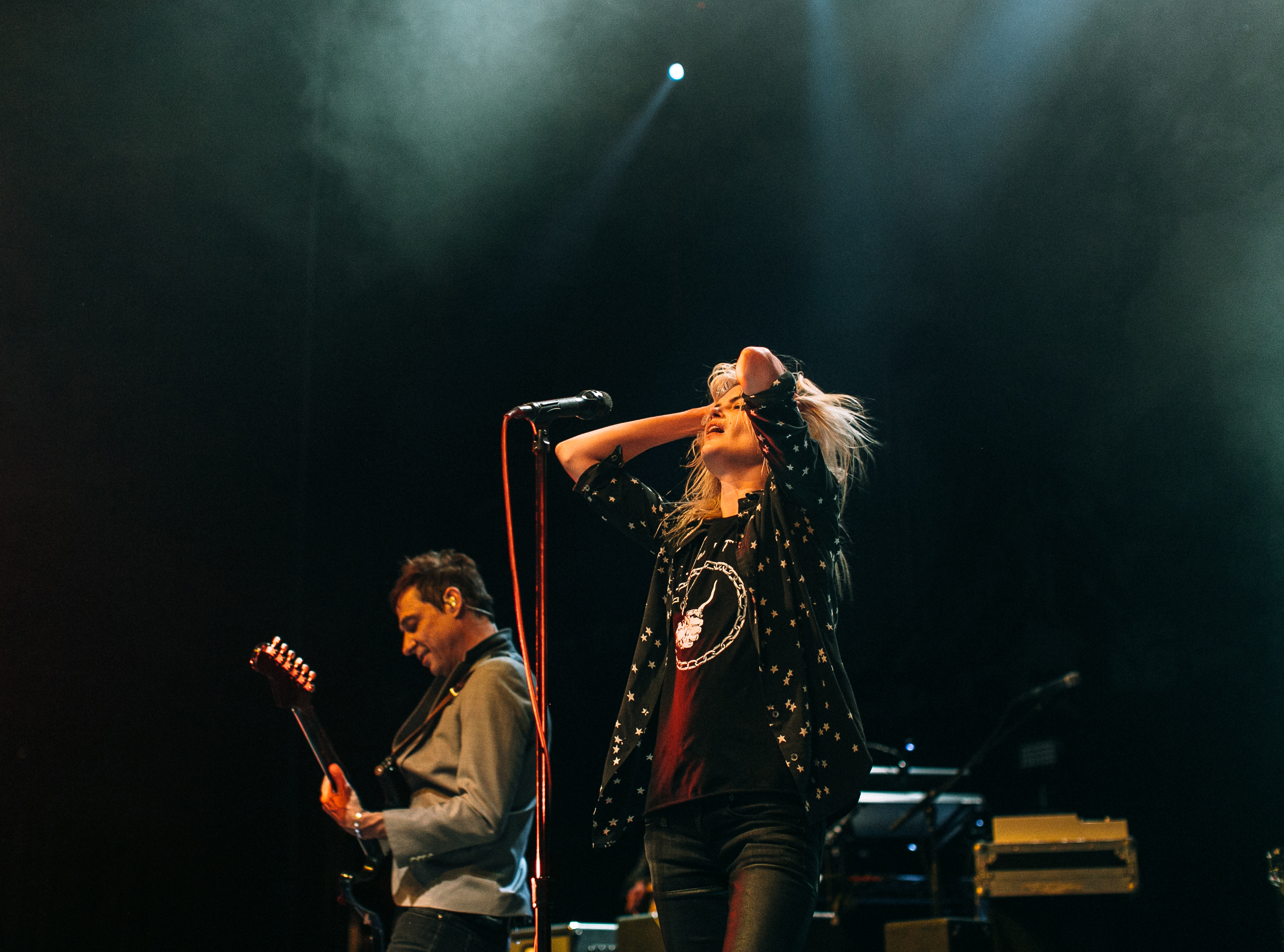 Jamie Hince and Alison Mosshart of the band The Kills at Chicago’s Riviera Theater May 23, 2016

This interview has been edited and condensed.

You had your first solo show last June in New York. Is the theme of this new collection similar to that one?

The one in New York was the collection of paintings from tour, and hotel, and traveling, and lots of years and lots of different things. There was a lot going on in that show. It was 127 pieces, so it wasn't exactly cohesive, necessarily. This [collection] literally is all the paintings I painted backstage on this last American tour in three and a half weeks. Very much a group of work from one trip.

Do you pre-conceptualize the paintings before you begin? Or is it more impulse-driven?

It's definitely impulse-driven. I tend to be inspired by whatever is around me, and what's great about traveling is that, you wake up and you're in a different city and your first sort of war with the world is, Where do I find coffee? And you go for a walk and find coffee, and all manner of adventures could ensue at that point.

I always go backstage and generally, before sound check, I will pull all my painting stuff out and find a spot backstage somewhere, if there's room. Sometimes there's 12 of us standing in a tiny cardboard box, basically. Maybe one of every four venues we went to had a room where I could spread out a little bit. Usually there was no window, though. I keep contemplating maybe we should show these paintings in the dark, because I practically painted them all in the dark, in a basement under an old theater.

You've said that you don't always have the time or space to step back and really consider the paintings. Do you have aspirations to have that in the future?

I can do that, that's just a different way of working. I kind of grew up working like that, definitely in art school, where I've had a week to paint a painting, but that doesn't seem possible to me at the moment. So this kind of thing has come about where it's very fast and very impulse-driven.

When I look at those [paintings], they kinda look like diary entries to me. I can remember immediately where I was when I did them. What they are [to the viewer] I have no idea. Everybody looks at things differently. 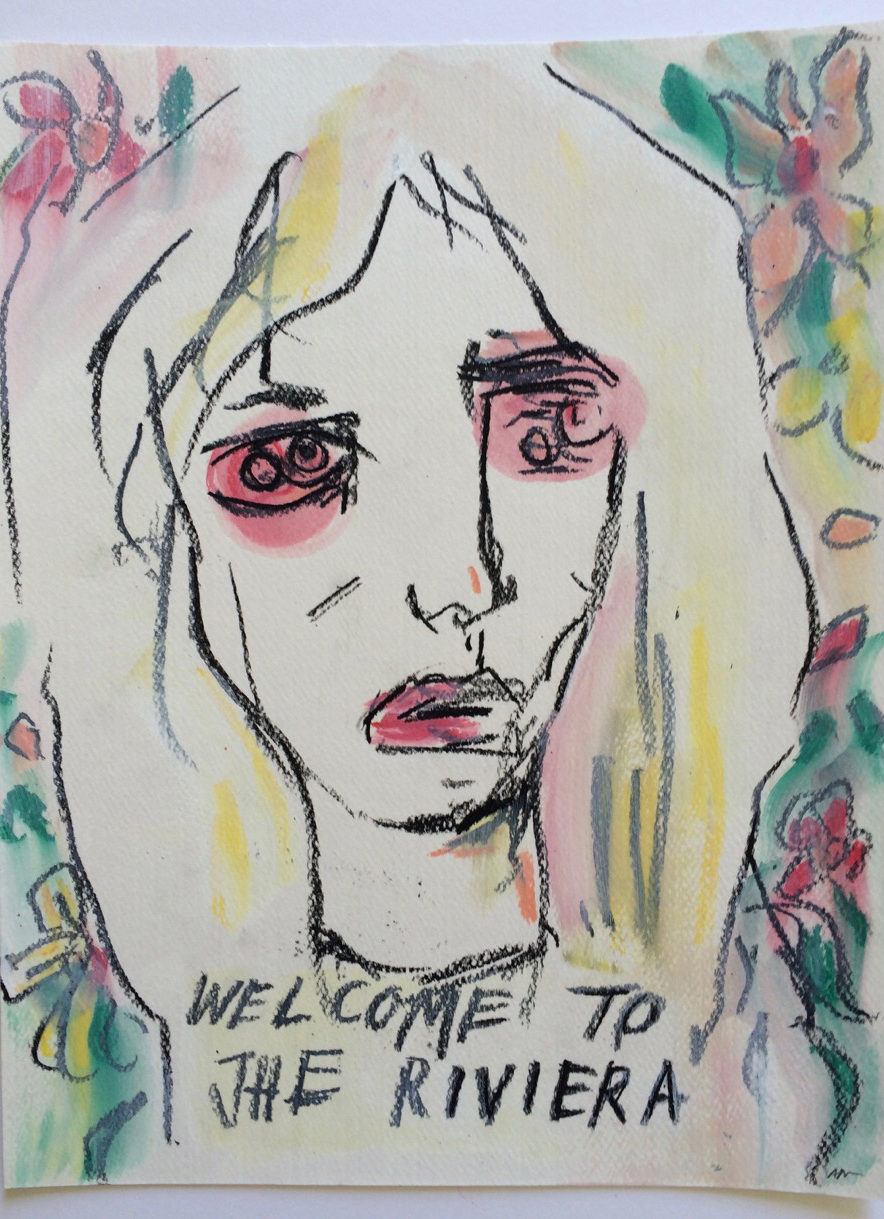 Do you write when you're on the road, or does that require a different head space?

I haven't much. It requires more space space. A venue is loud at all times. You roll into town and immediately everyone's setting stuff up and making tons of noise, then there's sound check, then the opening band's sound check, then the doors open and then the music in the club is on. It's a constant cacophony of sound. It’s not a place to sit and write.

I don't mind painting in front of 20 people. I'm just on the ground, people can walk around me.

You just tune them out?

No, I'm in mid-conversation half the time. It's great. It’s a social thing. I'm just sitting all day backstage, there's nothing to do, and so it's a great thing to bring my art supplies and paint. Every day I wake up and I know I've got that, and it keeps the whole creative thing going. I mean, everything can start to feel like an airport lounge.

And at the end of the day you have this portfolio of work.

Yeah. It's really cool. Everything's dry, and you pack it up, and you go to the next place.

Do you have any visual art influences, any artists that you feel inform your work?

One of my favorite painters of all time is Don Van Vliet (Captain Beefheart). When I found his paintings, that was a turning point for me. I don't know what it was about them. It’s a kind of intrinsic, indescribable something that makes me so excited that all I want to do is paint.

You’ve said that if you could perform with anyone, dead or alive, it would be Captain Beefheart.

Yeah, I just want to hang out with that guy. It's very unfortunate that he's not around anymore. It's kind of blowing my plans. [Laughter] 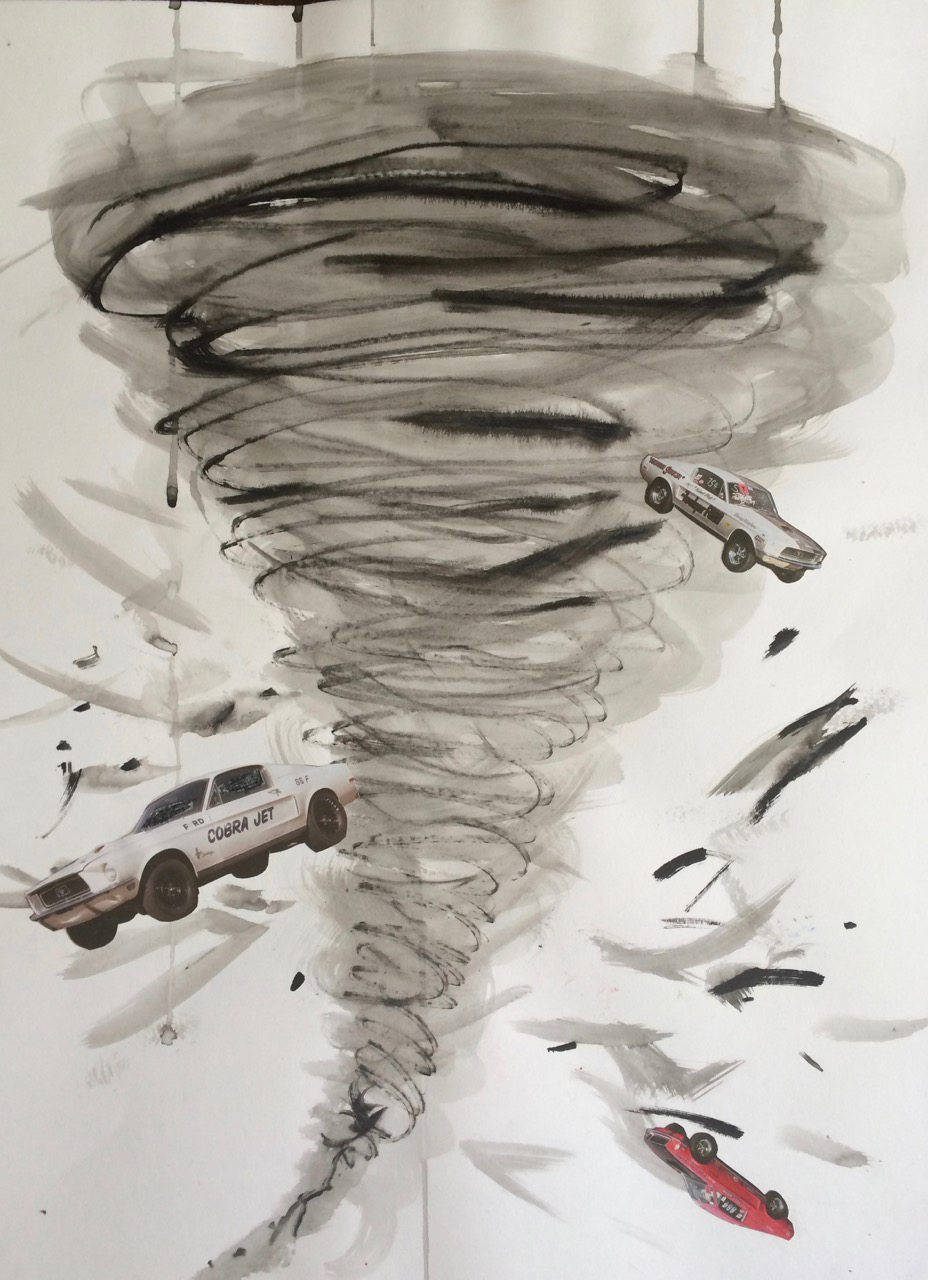 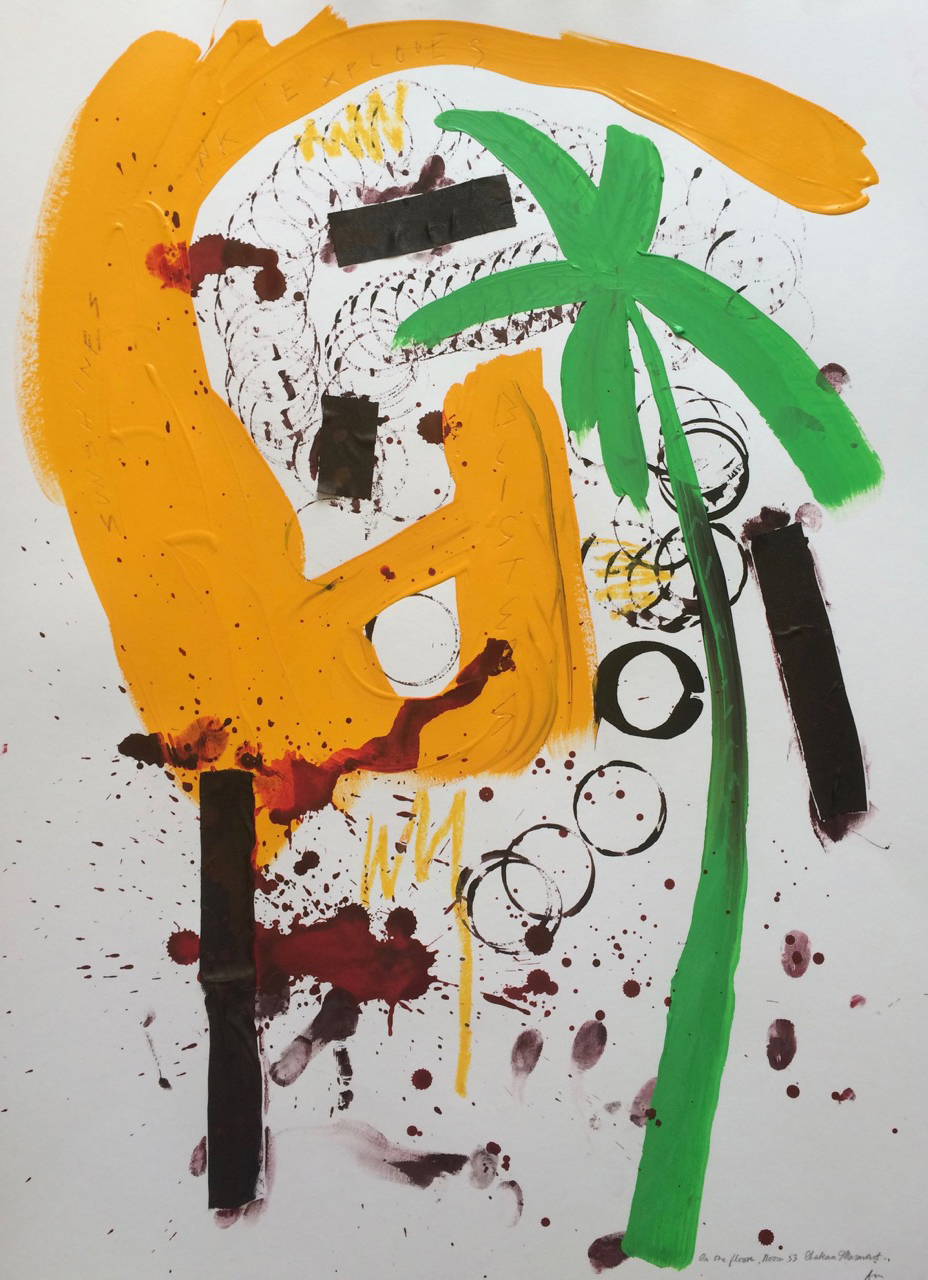 “Blister in the Sun”

Do you have a favorite painting in this collection?

I love that “Hot Rod Tornado” one that I painted in Kansas City, when tornado sirens were going off, and flash flood warnings, and we're in the venue and we have a huge security brief downstairs in the basement about how we were going to get 3,000 people into the basement if this was going to happen. I made that big tornado full of muscle cars. And I love the one I painted on the floor of the Chateau Marmont, when all my art supplies were exploding in my bag. This was the last day of the trip and I had a real mess on my hands in a really nice hotel.

I really love that “Vancouver Alley Rats” painting. Jamie and I had gone outside of the club in Vancouver, it was the middle of the afternoon, and we were walking down this alley to check out a vintage clothing store. There is this couple in the alley, shooting up. It was pretty fucking grim. We were, like, 15 feet away and they just picked up glass bottles and threw them at us. It's really surprising when you hear shattering glass right by your head, [when] you’re having a little afternoon stroll in the sunshine. I like that painting, though. It is creepy. 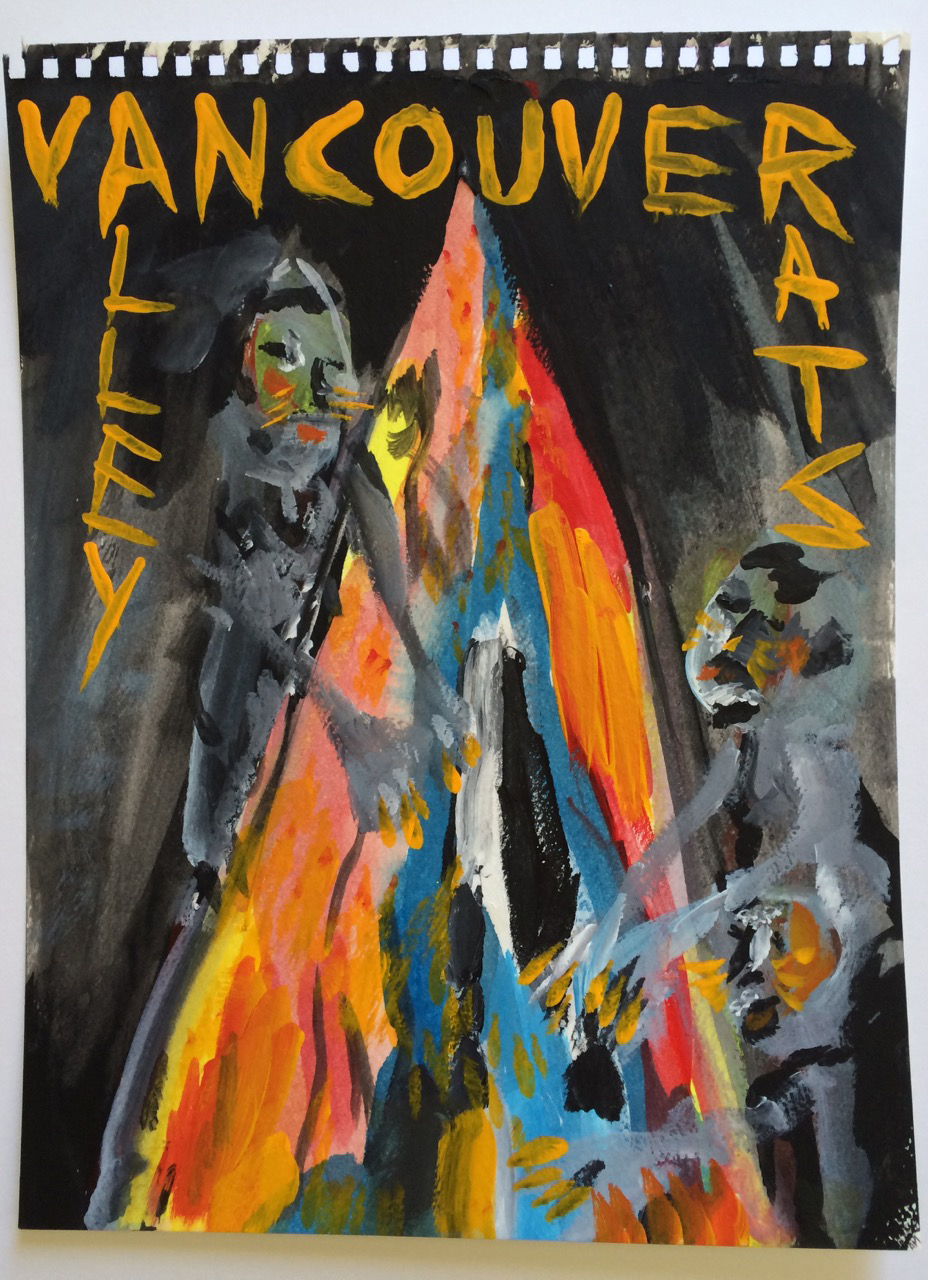 What's the connection with the muscle cars in the tornado painting?

I'd gone for a walk two days before that and found this book full of muscle cars. I'm completely obsessed with muscle cars. I started cutting them out and I liked the idea that they were getting  picked up and turned around. I wish Kansas City was full of cars like that, and that actually would have happened. [Laughter] In my imagination, it was going to. 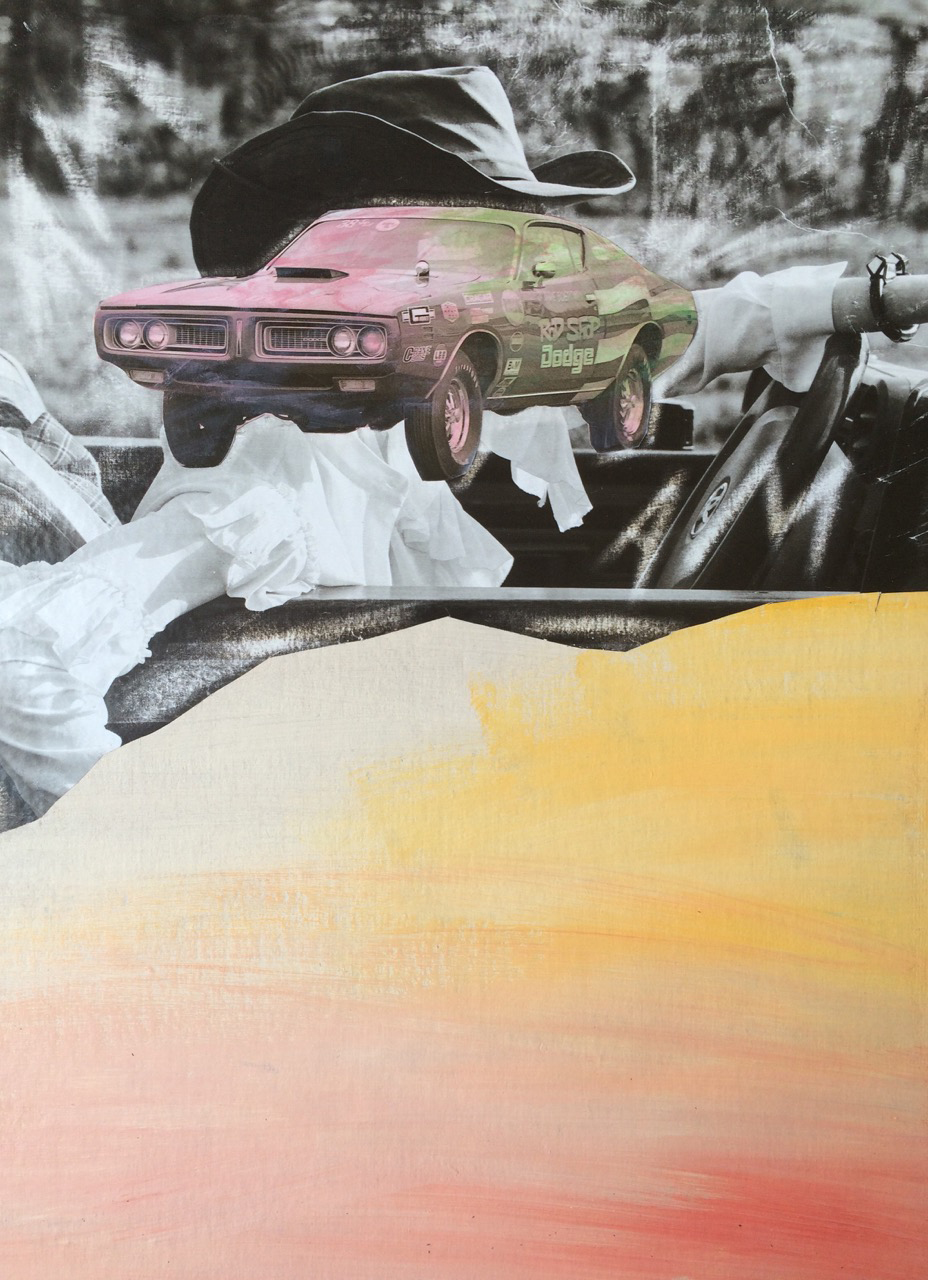 Do you have a muscle car?

I do, yeah. It's in Nashville. I'm going to drive it to Shindig.

You grew up in Florida, skateboarding, listening to punk music…How did that influence your work and where you are today?

Skateboarding was a really big deal, because skateboarding led me to punk music, and led me to art. I was obsessed with all the graphics on the bottoms of skateboards. At that time it was particularly incredible, early 80s, mid 80s...It was like every skateboarder knew how to do incredible art. And I learned so much about music because of that.

What bands were you listening to then?

Hilariously, I don't know what I was listening to because I would copy the tapes of the older boys who lived next door to me, and they would not tell me what anything was. I had these compilation tapes with 50 songs on them, and I would play them and play them. It still happens today when I hear a song, and I'm like, who is that? That was on the tape, when I was seven. I didn't care who it was, I just liked it all.

I discovered Fugazi this way, and that became my favorite band of all time. I followed them on tour as soon as I got my license. I was obsessed with that band.

You followed Fugazi on tour? What was that like?

Oh yeah. They were very kind to me. They put up with my total avid fandom. This is the only band I've ever been like, I have to see every show. They were awesome. They would give me tea and passes to get the underage kids in [the show]. A couple of times they let me sleep on their hotel room floor, they'd feed me, they were amazing. They are the coolest people on earth.

Writing songs and performing with the Dead Weather and The Kills, and creating visual art are very different entities. Do you ever find it difficult to switch between them?

No, I don't. All that stuff happens naturally, like one thing comes up to replace the other when it's time. They are really different things, but they all kind of come from the same part of my creative brain. There’s been interesting situations where I had to be rehearsing for one band, and then leave and go play in another, and that's just a little confusing remembering lyrics, but other than that, it's totally fine. [Laughter]

Do you feel like the new album “Ash and Ice” is different from The Kills previous albums?

I think it's definitely different. That's always the goal every time we do a record. It was a real journey to make it. It took us a while to do it. We recorded in L.A. in a house, then we finished it in New York at Electric Lady. [There were] so many songs we abandoned in favor of these ones. It was a really intense six months of crazy. It's very hard for me to listen to it and compare it to anything from before. Doing a set now, you're combing all the songs from old records and going back and forth, and they all seem to sort of seamlessly go together, like they always have existed. So, it feels good to me. 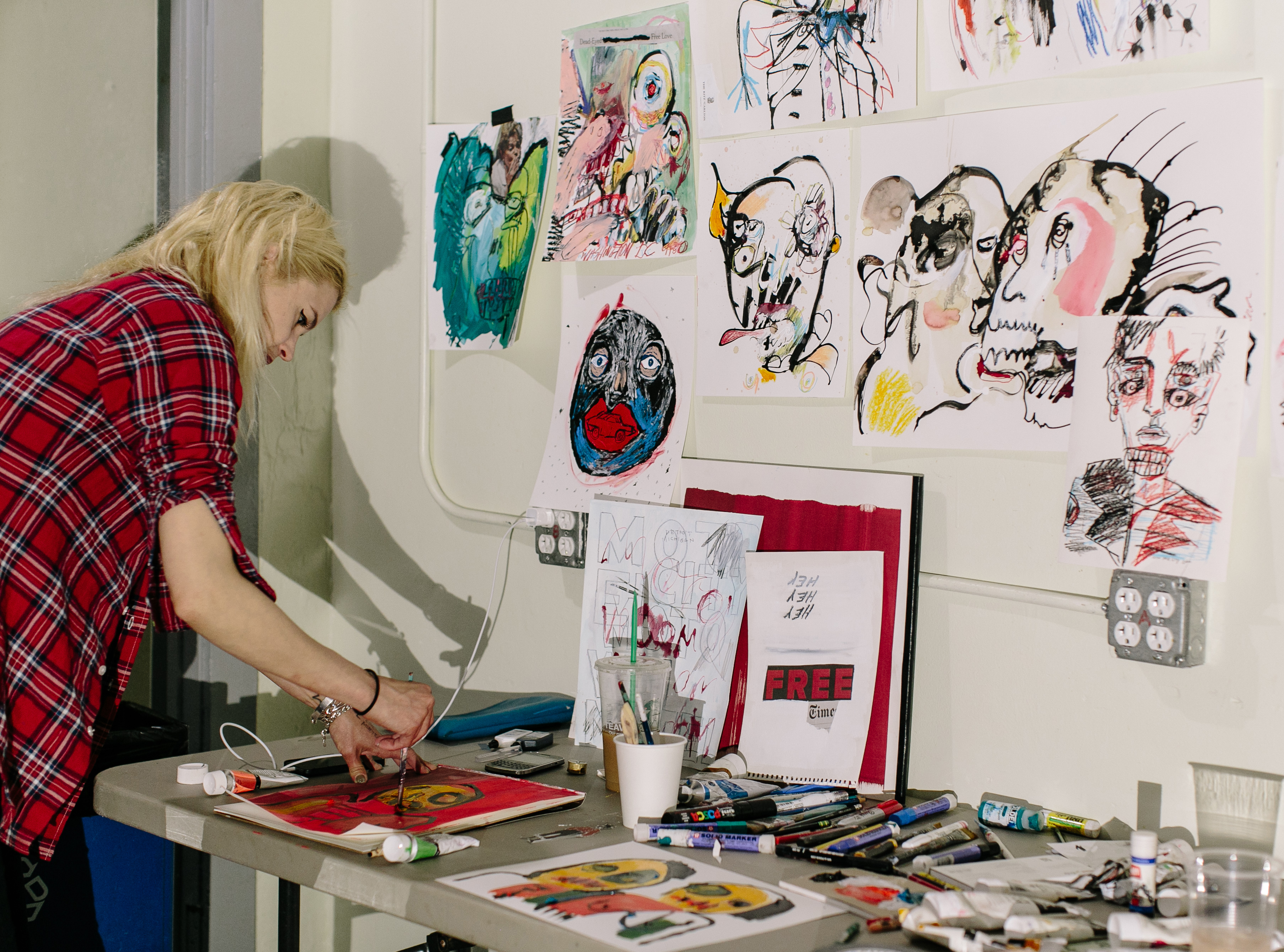