Back to all posts

Co-producer of The Rise and Fall of Paramount Records and co-founder of Revenant Records Dean Blackwood at the BLUEPRINTS installation in our Austin store. Photos by Matt Rainwaters

It’s time again for our annual Austin Shindig, a showcase of stellar musical talents presented by K-Swiss during the week of the SXSW music festival. This year marks our fifth Austin Shindig, which we’re hosting with media partner American Songwriter magazine and Third Man Records, with whom we co-curated the lineup. Revelers will rock out to the nine-band set and enjoy Woodford Reserve signature cocktails at Weather Up in East Austin.

This year we’ve added a second act following the showcase. In the venue space adjacent our Austin store, at 1122 West 6th Street, we will host the grand opening reception of BLUEPRINTS, a museum caliber exploration of Paramount Records and the birth of American music. The collaboration of Revenant Records and Third Man Records, The Rise and Fall of Paramount Records is a two-volume comprehensive collection of recordings released by the small, unassuming Wisconsin label, Paramount Records, in the first few decades of the 20th century. The first volume won a Grammy and Volume Two is just as impressive; both are a hefty 20-pound wunderkammer including six vinyl LPs, 800 digitally re-mastered tracks, a hardcover book detailing the Paramount Records narrative and a companion softcover encyclopedia of artists bios, housed in uniquely designed cabinets that reflect the era when the recordings were made. 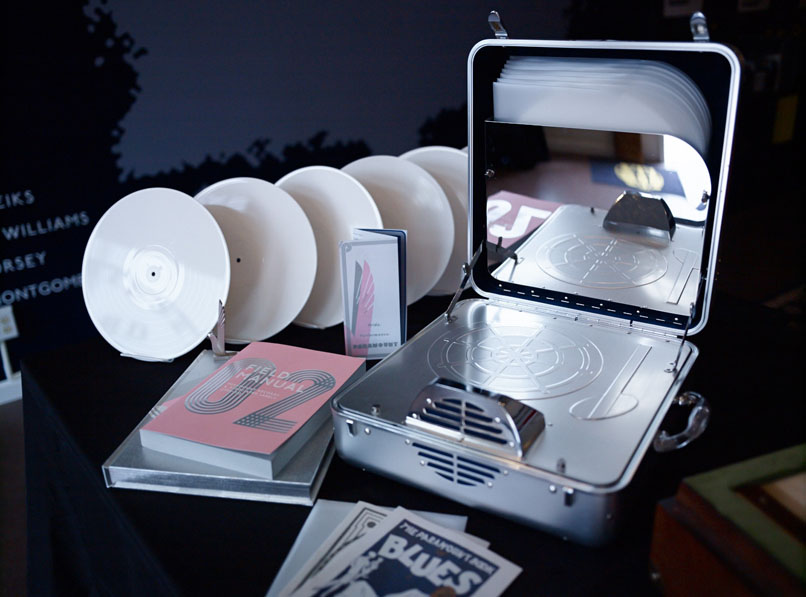 It’s a deep look into the genesis of America’s best music and the label that first recorded icons Louis Armstrong, Jelly Roll Morton, Blind Lemon Jefferson and Ma Rainey, among others, that warrants hours of conversation and exploration. To get a better idea of the magnitude for the project, co-producer Dean Blackwood of Revenant Records spoke with the Journal about the two volumes and the BLUEPRINTS installation.

Journal: How did you get involved with the project? How did it come together?

Dean Blackwood: I had this record label called Revenant for about 20 years, which I started in Nashville with John Fahey, who died in 2001. We had this vision for things we wanted to do, which was to release old box sets, though at that time it was all CDs. The revivalist movement in vinyl hadn’t happened yet. One release was Screamin’ and Hollarin’ the Blues: The Worlds of Charley Patton. It was Mississippi blues - this guy was a generation earlier than Robert Johnson - and that sort of put us on a map. We won three Grammys for that, and so we sort of settled into those types of projects as our niche and because we weren’t just limited to these old timey recordings - we did everything from avant garde guitarists to pre-jazz collections for hardcore fans, but not forbiddingly specialist.

I moved to Austin in 1998 but I had friends in Nashville and I had known Jack White (the musician and founder of Third Man Records), just from a distance - we’d never done anything together. But, three or four years ago, a friend of mine who happened to have a bandmate in common with Jack arranged for a meeting and Jack and I both happened to be reading this book about the Paramount label, which it turns out, was kind of this revelatory thing, to read more about it.

Jack and I both had this sort of mutually obsessive relationship with Charley Patton’s figure, who was a Paramount artist, and we were both aware of that in each other, we shared that. When I visited, I had put together this sort of timeline because this book is told in a non-linear fashion - The Rise and Fall of Paramount Records. The guy who wrote it, Alex van der Tuuk, is one of our co-producers on the project, but at the time he was just a guy I knew and he’d written this book, so I’d just put together this thing to try to make sense of it myself - what happened when, who was recording for the label. When I met with Jack, I had that with me and we both looked at it, sitting there slack-jawed, seeing all these artists together, stacked up on this timeline. It just seemed crazy that it could have actually happened, that you have this many artists recognized today that just being these pivotal figures in the development of American music that you know were recording for this one little label. And why is that?

You look at all these things together and your’e like, Why? What’s the story of this, how did this happen? So we all felt like this was something we could get behind. We didn’t know where it was going but we started in and at that point it was just a matter of how do we want to tell the story? How do we want to bring people into the music? Of course we got very involved from the design point as well. As Jack puts it, the design elements are important but it’s really just kind of the witchcraft that lures people into the story.

J: What are some of the highlights of the Paramount Records story?

DB: When Thomas Edison’s factory burned down, he found this furniture maker in Wisconsin to make these phonograph cabinets he’d designed. Once the furniture company completed the contract, they continued making the cabinets for themselves and then thought, Oh, by the way, we should sell some records to try to drive sales, because nobody cares what was on the records, they just wanted some sounds to listen to. That was their premise. They were these white, fairly well-to-do furnituremakers running a chair company. They had no intention of doing anything other than just moving a unit this week as cheaply as possible so they could eek out some profit, and they ended up being unwitting purveyors of culture, of truly home-grown American culture. This little record label in Wisconsin did not care a wit about cultural preservation or even understand its mostly black audience.

For the first five years, they just put out anything that was available. Has-beens, never-weres. Then people wanted big names to listen to, but Paramount didn’t want to pay for it, so five years in they were going out of business.

They ended up being not only the first but really the only documentarians of what America sounded like during the late teens and really the 1920s and ’30s - what ordinary folks were making, not parlor music, not pop. They were really recording almost anything that came in the door. Because they didn’t care about any of this, there are no master recordings, all that stuff was melted down. There were no tapes in that era so all that exists are the original copies - in some cases, one copy.

This is at the very route of American music. You can trace it all back to its genesis here with these sounds and this little label that could. A lot of this stuff is lost to time altogether, you know you can hear these little hints of it, but there’s plenty of stuff that didn’t get recorded, like whole traditions.

The story of the label kind of mirrors America’s fortunes because of course, like America, the label really made its fortunes off the backs of the great migration, African Americans from the South to the Midwest and the North. All these performers that ended up in Chicago ended up being first recorded by Paramount. The label, like America, really struggled with this whole notion of what it meant to be modern. 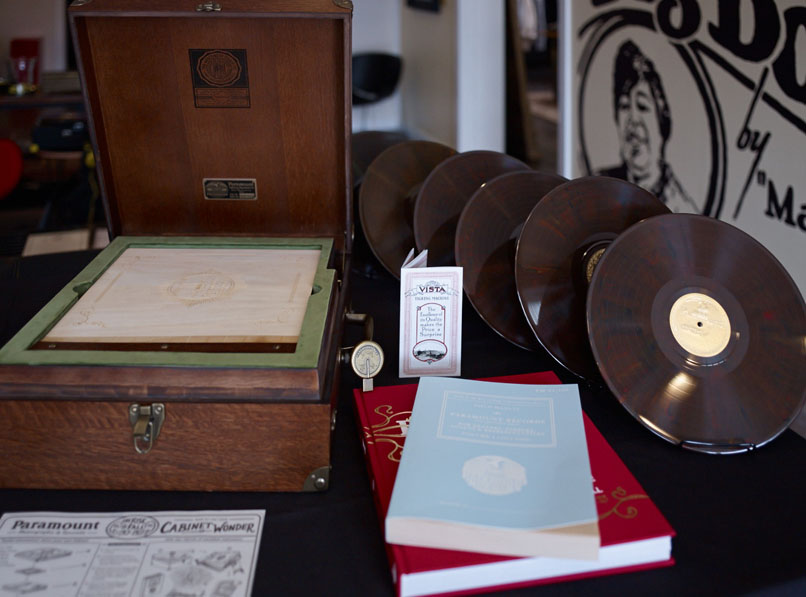 J: How do the cabinet designs that house Volumes One and Two complement their respective contents?

DB: They were designed to represent the design themes and the larger story that was taking place at the time of the recordings, so the first volume covers mostly the 1920s recordings but we didn’t really have an identity style of our own then, we just kind of borrowed from others, so what you see is this sort of Craftsman style. But by the early ’30s, the predominant style was very streamlined, aerodynamic, like an Airstream trailer. It was consistent with our struggles about what it means to be modern in the world, all built around the machine. We had clearly made in a very visible way progress over the rest of the world in our industrialization of stuff, in making these aerodynamic machines and all that and so the second volume reflects our version of Art Deco which was happening all over the world.

They’re both designed around portable phonographs that were being made during that time period and both happen to be RCA Victor, later RCA. Both the wood one and aluminum were based on models used during those time periods and we sort of used those as our jumping off point and took it about as far as we could but still making it an approachable item.

J: Also included in each collection are reproductions of ads for the various artists on the Paramount label. Can you tell us about those?

DB: The ads would run every week from 1920 to 1930 in the Chicago Defender - hundreds of hundreds of these beautiful ads, and it’s very important to the story. Hand-drawn, beautiful line drawings, cross-hatched, hand-illustrated ads that no one knows who did them. It looks like it’s mostly the work of a single artist but probably just somebody in an advertising agency in Madison or some big city did them. (Cartoonist) Robert Crumb kind of ripped off his whole style from this thing.

J: It’s interesting to see a combination of vinyl recordings and digital files in the same collection, not to mention the custom metal USB drive that contains a first-of-its-kind image player app with all the tracks and ads. What was the thinking behind that?

DB: We wanted to create the best of both these worlds, new and old technologies to help you bridge to the story in the best way. So the new technology makes more sense to do along with good old, hardbound, cloth-covered books which is still the best way to consume this type of data, and then of course mix in a heavy dose of vinyl. One lends to the story of the 90 or so tracks that are on each of the sets of vinyl with each of the volumes. You can’t deliver 800 tracks to somebody and have it make any sense without using some sort of digital character.

J: Tell us about BLUEPRINTS. What can we expect to see in the installation? What events do you anticipate holding as part of the installation over the next couple of months?

DB: We’re hoping to engage with people on their terms, in a way. The idea is for it to be visually compelling as a gateway to this incredible story, to pull people in to have an experience. We have all these framed original ads and large scale newly printed screen print versions. We’ll have the full set up of the two volumes and an insulated headphone experience with each of the sets of recordings. This is our chance to be a larger scale pop-up, museum caliber immersion, in that people might not only learn about it, but they see with the BLUEPRINTS name that this is like the secret blueprints to all the music that’s happening around them at South By.

This interview has been edited from a longer format. 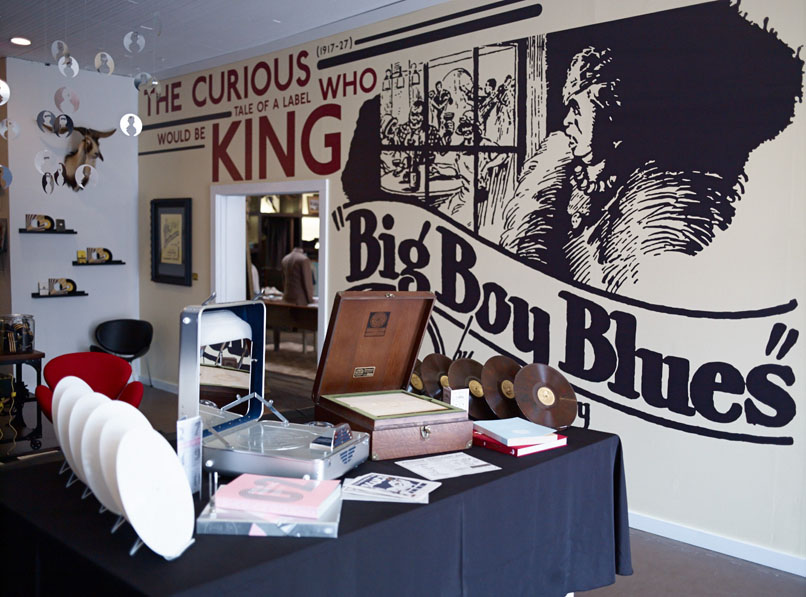 The BLUEPRINTS installation will be open to the public through May at Billy Reid Austin, 1122 West 6th Street in Austin, Texas. Hours are Monday through Saturday 10-7, Sunday 12-6.